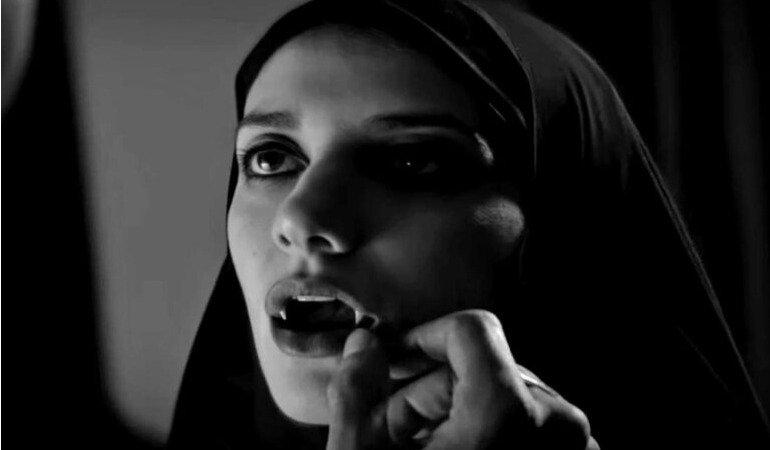 The subversive rebellion of “A Girl Walks Home Alone at Night.”

Ana Lily Amirpour’s black-and-white vampire noir film A Girl Walks Home Alone at Night (2014) has garnered somewhat of a cult following. Set in the fictitious Iranian ghost town of Bad City, the film features a chador-wearing, skateboarding young female vampire known only as The Girl, who stalks the streets of the city at night preying on unsavory men.

The Girl (played by Sheila Vand), with her vampiric teeth and supernatural powers, subverts the image of the veiled woman as submissive, turning the victimhood suggested by the film’s title on its head. This girl walks alone at night with no fear; she is the one to be feared—a fact the viewer learns along with her first victim.

Shortly before The Girl appears in the scene, we watch two characters, Saeed (Dominic Rains) and Atti (Mozhan Marno), in a car. Saeed represents the cliché pimp, covered in tasteless tattoos (such as “SEX” across his throat and “jakesh,” or “pimp,” on his scalp). Atti is a prostitute who works for him, the victim of both Saeed and the patriarchal society of Bad City. Their encounter turns violent when Atti asks for her cut of the money she has earned; Saeed refuses to give it to her and instead violently drags her out of the car and throws her to the ground. The Girl watches their encounter, lurking in the dark.

In the next scene, as Saeed walks to his flat, The Girl follows him. Not only does Saeed show no signs of fear, but he is intrigued by her and invites her back to his home, suggesting his desire to unveil her. In this scene, Amirpour reverses the power dynamics between The Girl and the pimp, subverting the image of the veiled woman as a victim and the pimp as the predator (a motif reinforced by Saeed’s home decor of stuffed deer heads and tiger prints). As Saeed approaches The Girl, she takes his finger into her mouth in a sexually suggestive manner.

What happens next is unexpected: Her fangs emerge, and the “good” veiled woman sucks the blood out of his finger, biting it off and spitting it out, leaving the once confident Saeed in a state of fear and shock. She then attacks and kills her victim. This is the first time the audience witnesses The Girl’s vampiric transformation, and her violence is clearly seen as revenge for Saeed’s violence toward Atti, which affirms, along with other encounters in the film, the vampire’s feminist agenda.

The chador is central to the visual significance of this vampire. It visibly marks The Girl, redefining her on the international stage and serving as a rejection of the stereotypes often associated with the image of the Muslim woman. Whereas the Muslim female body is constantly subjected to veiling and unveiling and exhausted by the discourse of liberation, The Girl brings to the screen something new: the magical, the monstrous, and the rebellious. Fearlessly cruising the dark streets of Bad City on her skateboard—a skateboard she steals from a young boy—The Girl shatters any assumptions of pity. The veil, flapping behind her like a superhero’s cape, allows her to float with power and adopts an entirely new meaning.

The film, without the constraints of censorship that normally govern Iranian cinema, challenges some of the Islamic Republic’s ideals. In the context of post-revolutionary Iran, it is femininity and women’s sexuality that must be tamed and controlled. Veiling becomes the means through which this is attempted.

But by her very nature, The Girl can never endorse or promote such ideologies—she can never be controlled, tamed, or contained. The film turns the symbolism of the veil on its head by bringing to the screen a chador-wearing vampire, with fangs and blood dripping down her mouth. She is at once bad, veiled, and sexual.

The film also brings to its American and Western audience a different look at the veiled woman. The chador, as a culturally specific Iranian veil, is used to challenge Western assumptions of the role of women in Muslim societies. The visual signifier of the chador interrupts the American and Western world of the film.

To keep up to date with the Latest News